Hear Rabbi Michael Ramberg and about the New Sanctuary Movement 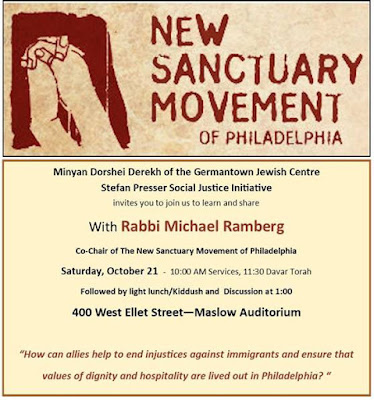 This program will be the 2nd of our Stefan Presser Social Justice Shabbatot.

Rabbi Michael Ramberg will be our darshan at approx 11:30.
Following a Lunchy Kiddush, he will speak about the New Sanctuary Movement of Philadelphia.

Posted by Betsy Teutsch at 10:17 AM No comments:

Cemeteries and Fragments: A Yizkor Kavvanah by Rabbi Robert Tabak

In recent weeks I visited two locations with broken Jewish tombstones.
This kavanah was presented by Bob at Passover Yizkor 2017. It is up at his blog Light Amidst Doubt.
A few days after the news of the vandalism to Mount Carmel cemetery in Northeast Philadelphia, I was there as a rabbi aiding the multi-faith cleanup efforts.  There were Jewish volunteers from many neighborhoods and congregations, Muslims, and Christians.  Of course there had been vandalism.  But part of the story was obscured by the focus on antisemitism.  I worked with volunteers pulling inches of dirt and feet of weeds off of long-fallen and sometimes partially buried tombstones, some broken.  These had not been damaged in the last week.  One of the less-publicized aspects of the clean-up was that some of the volunteer teams had been assigned to try and catalogue the names and locations of every one of the graves. No registry could be found.  Laws about cemeteries in Pennsylvania, which like this one can be privately owned, are notably lax. This was a neglected cemetery, with almost no care or records in recent years, from what I could observe.  Yet each of these stones represented a story, a life, a fragment of a journey of our people.
A few weeks later I was in Barcelona.  Some parts of the old Jewish quarter (Call) can still be seen in the old Gothic Quarter.  My wife Ruth and I took a Jewish walking tour, and the guide pointed out the clearly visible pieces of Hebrew gravestones imbedded in various medieval walls.  After the Jews had been expelled in 1492, their cemetery was destroyed and stones re-used for buildings.  The renewed Jewish community and historians have located the medieval Jewish cemetery and have had it designated an historic site, with a monument.  Again, the Jews scattered, but every stone was a story, each fragment a fragment of a life.
I was reminded of a scene in a recent documentary film about modern Poland.  In one small town, a young Catholic man in his thirties was researching the history of the vanished Jewish community – which did not make him popular.  He found many stones from the Jewish cemetery used as paving stones and in building foundations.  He removed those stones and brought them back to the site of the cemetery. In the film, the young man made a trip to Israel, with photos and maps, to consult with an Orthodox rabbi – a setting he did not usually enter. The Orthodox rabbi probably did not often meet with young Catholics, either.  The question the young man asked was having recovered these tombstones, would it be disrespectful to erect them upright in the cemetery, since no one knew exactly where they had stood in 1939.  He wanted to do the right thing.  The rabbi approved, and said this project would honor the dead. (The film was Shtetl [1996] by Marian Marzynski, and the town was Bransk.)
This reminded me of the midrash about the fragments of the first tablets, broken and no longer legible, also being honored and carried by the Israelites. (BT Bava Batra 14b.)
Sometimes we have whole stories.  Sometimes we have memories of our parents, children, siblings, grandparents.  But there are also generations who came before them, people whose names we do not know, but whose lives and sacred journeys are part of our Jewish story. Sometimes we have only fragments. We also honor them along with the broken graves and stones.
This article originally appeared in the April 2017 issue of the RRA Connection newsletter, publication of the Reconstructionist Rabbinical Association, which I edit.  Reprinted by permission.
Posted by Betsy Teutsch at 7:45 AM No comments:

Please Honor IndivisibleNWPhilly With Us on September 16! 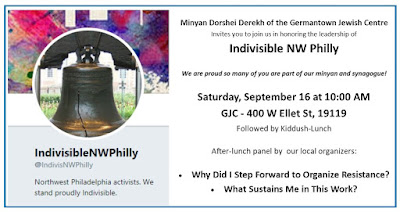 Posted by Betsy Teutsch at 10:09 AM No comments: 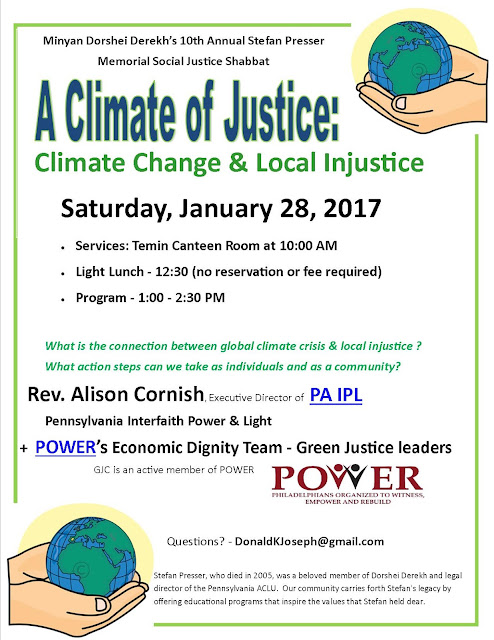 Posted by Betsy Teutsch at 9:55 AM No comments: