American Grace: Dorshei Derekh Summer Book Group
Everyone welcome!
Saturday afternoons @ 4 PM on July 9, August 13 & September 17 @ the home of Betsy Teutsch
The group will be reading & discussing American Grace, an analysis of contemporary religious life in America, by Robert Putnam & David Campbell.  It's a long book, so get reading!  Invite others, the more diverse the group the more interesting it will be!  Hosted by Betsy Teutsch, email her at bpteutsch@comcast.net for details and her address.
Question for openers: how many different religious traditions are represented in your extended family/families?
Posted by Betsy Teutsch at 7:36 AM No comments: 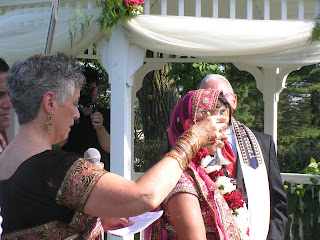 Naomi Klayman and Adina Abramowitz celebrated the wedding of their son Jeffrey Wiesner and Devalina Guha-Roy on Sunday, May 29th in Delaware County, PA. The couple thoughtfully included rituals from their Jewish and Hindu traditions and discovered that there is a lot of overlap between the two.
Devalina’s family is from Bangladesh, and guests came from as far away as India and Israel for this joyous occasion. Guests included Jews, Hindus, Muslims, and Christians who all welcomed and embraced each other. It was great to see women in saris and men in kurtas dancing the hora. As one person mentioned, “the United Nations could take lessons from this family!”
Naomi and Adina are full of joy that Jeff and Dev found their beshert and are creating a home together. Jeff is a web designer and Dev is an elementary school teacher specializing in the use of computers in education. They are avid bikers and have gotten Naomi and Adina into distance biking. They share commitments to acting with intention and to social and economic justice.

Meenal Raval orchestrated a Car Mitzvah , or more precisely (but less word-playful) a Car-Free Mitzvah, for Barb Pearson.  Barb has given up her old mini-van and opted to get around via her trusty bike, mass transit, walking (with her dogs, of course) and the occasional PhillyCarShare rental.
Meenal is looking to match car-sharers up, folks who each have minimal use for a car, but prefer to hold on to their vehicles.  In Barb's case, she decided she used her car so infrequently that it was not financially sensible to pay insurance, or hassle with parking, inspection, and maintenance.
Below is a gift from one of the other celebrators, her neighbor Rick (who still has a car): 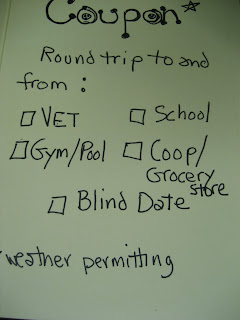 Email ThisBlogThis!Share to TwitterShare to FacebookShare to Pinterest
Labels: members of DD


Wow, for those in the world not lucky enough to receive a blessing during our minyan, from our very own Dayle Friedman, famed for gloriously elegant, literary, customized mi shebeyrachs, she is available to send one on request, by video!
Check out this feature and many more at her lovely new site.  We're all invited to its virtual Hanukkah Habayit. Ever see this new .co before?  Yasher koach, Dayle!

Posted by Betsy Teutsch at 2:07 PM No comments:

Email ThisBlogThis!Share to TwitterShare to FacebookShare to Pinterest
Labels: members of DD

Nathan Martin is organizing the ReconRider team for the Labor Day Weekend Hazon ride.  Many Dorshei Derekh members who don't happen to be rabbis or reb students are invited to join - we have had many participants in past Hazon rides.

RECON RIDERS!!
Our Philadelphia Group of cyclists for the upcoming Hazon NY Jewish Environmental Bikeride  is making a big splash this year.
Come be part of the Recon Rider team!  It’s not to late. There are several Dorshei Members who are already riding!
-          The ride is geared to people with various riding backgrounds (beginner, intermediate, and advanced)
-          You can still get a 50% rider registration discount by registering with the discount code “summer” before June 30th!
-          And Hazon is arranging for bus transportation from and back to Philadelphia (cost is likely to be $30-50/person round trip!)
And if you can’t participate in the ride please support the recon rider team. Proceeds will go to support a variety of Jewish environmental initiatives including the development of a course on Jewish leadership and food justice at the Reconstructionist Rabbinical College. To donate to the team, simply click here:
Thank you in advance for your support and hoping to see you as part of the team.
Nathan Martin (Recon Rider Team member)
Posted by Betsy Teutsch at 11:24 AM No comments:

Email ThisBlogThis!Share to TwitterShare to FacebookShare to Pinterest
Labels: hazon

Posted by Betsy Teutsch at 11:50 AM No comments:

Betsy Teutsch in The Jewish Exponent

This article by Betsy Teutsch appeared in this week's Exponent:
June 02, 2011

The drafting table where I have been perched, creating ketubot for the past 37 years, has proven to be a ringside seat for detecting trends in the Jewish community. In honor of June, which was once peak wedding month and still is a popular time to exchange vows, here are some of my ethno-sociological observations:
May and June were popular wedding months when brides and grooms were younger, scheduling celebrations around their academic schedules. Now, average American Jewish brides and grooms are, unless they are ultra-Orthodox, way beyond their academic years.
They schedule weddings around work schedules; pretty much any three-day weekend is now prime time for weddings. As Jews have migrated to the Sunbelt, with large Jewish populations in Florida, California and Arizona, winter weddings have become increasingly popular.
A big part of my work involves names. The bride's and groom's names in English as well as Hebrew, along with the same for their fathers and mothers, are all included, six per ketubah order. A generation of Irvings and Harriets (Yitzchak and Chana) or Mildreds and Mannys (Malka and Mendel) are fading from the scene, giving way to the next generation, baby-boomer parents.
Now it's Linda, Debbi and Barbara, known in Hebrew as Leah, Devorah and Baila, along with their husbands, (or just as likely, ex-husbands) Mark, Barry and Alan -- that would be Moshe, Baruch and Avraham -- proudly escorting their children to today's chupahs. They're Ashley, Lindsay and Elana, marrying Ian, Josh and Ari.
These names reflect dominant Jewish American trends, but I am also seeing brides and grooms from recent immigrant groups with names far less familiar. Iranian Jewish names frequently appear for couples from southern California. Their Hebrew names are classic, but when I encounter parents' Farsi names like Parviz and Shahnaz, I am perplexed: Which is the mother and which the father?
Recalling how hard so many American Jews worked to achieve Soviet Jewish emigration, I find the Russian names appearing on the information sheets especially touching.
Yelena, daughter of Svetlana and Igor, marrying Eugene, son of Galina and Vladimir, all very foreign, but the Hebrew looks just the same as for any other Jews: Leah bat Sara v'Yisrael, Gershon ben Gitel v' Velvel. Had they not left the USSR, what is the likelihood that now, 20 years later, they'd still be part of the Jewish people?
Sometimes the names are transliterations of Asian languages, which I then need to write in Hebrew -- hard to do if I can't pronounce them! One common Chinese last name, Pei, is easy to pronounce, but transliterates as peh.heh, the Hebrew word for mouth. Oy.
Another surprise is how much technology has crept into what is still an essentially handcrafted product. If the spellings are especially challenging or the handwriting illegible, my ace in the hole is to Google in two last names, and a Wedding Channel Registry usually pops up, along with the wedding date and location. (Sometimes there are links to a wedding website, which I have been known to check out, just for fun.)
And if the rabbi wants to read the ketubah in advance, to avoid any last-minute crisis, I simply snap a digital photo and shoot him or her off a jpg.
Expanding the marriage pool, we now have brides marrying brides and grooms marrying grooms. That stack of ketubot I printed with commitment ceremony wording? Progressive in its time, it is now obsolete. Bride /brides and groom/grooms are using the same wedding language as any other couple.
Marrying on Shabbat is clearly prohibited. The gray area is a before sundown start time for a Saturday night wedding, not at all uncommon in Reform circles. But Saturday afternoon Jewish weddings? This summer, an afternoon bride confirmed her wedding was scheduled for Saturday afternoon. When I looked up the Hebrew date, it was Yom Kippur, the 10th of Tishri. I'm still curious about a couple who marries on Yom Kippur but buys a ketubah. It is indeed a new world.
Last spring, I created a ketubah for our son Zach and his bride, Becca. There I was, on the ketubah as mother, a full generation after creating my first ketubah, when I was the bride. Zach's ketubah was followed by those of Zach's nursery school buddies Josh and Bension, both marrying this summer. I am thrilled to be a witness, as well as a participant, in Jewish continuity.
Posted by Betsy Teutsch at 7:50 PM 3 comments: