There were only a few bakeries in Fargo, and the Jewish women rarely purchased anything at them.  They were great bakers.  This was a cake my mother baked regularly, a favorite of my dad's.  I'd never actually made it before now, but seeing and tasting it really brought my mom back.  I can see her wearing a cobbler apron, 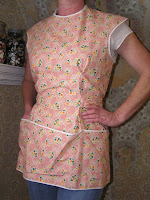 facing her ancient MixMaster on the counter, adding ingredients, concentrating on the procedures at hand.

This makes a very large, rich, moist cake.  It's quite similar to the Moosewood Cardamom Coffee Cake, so you could, in addition to the cinnamon, add cardamom.  It's also well-known as a Hungarian Sour Cream Coffee Cake.  Whatever you call it, it's wonderful.
She made it in a bundt pan.*  Bundts were all the rage in the 60's and '70's.  (footnote below).

Take out butter to soften.
Preheat oven to 375°
Spray a large bundt  or 10" tube pan with oil

In large bowl (or mix master), cream the butter with an electric mixer.  Add the sugar and eggs and cream very well.

In another large bowl mix the flour, salt, baking soda and baking powder, or just mix it into the mix master bowl in you are using a stationary mixer.  Alternate adding the sour cream + extract and the dry ingredients.  (I have no idea why this recipe calls for cake flour, but no arguing with a recipe.)

In a big plastic container with a lid, like a deli container, add the walnut/sugar/cinnamon, put the top on securely, and shake. (This is where you'd add the same amount of cardamom to be Moosewoody.)  A double size hummus container was perfect! 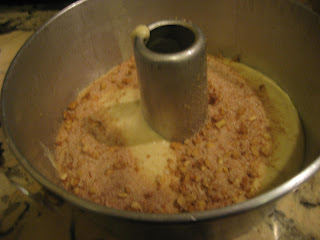 Cool.  To take the cake out of the tube pan, gently cut around the perimeter of the pan to loosen the sides and around the tube.  I now use a non-stick tube pan, so it means using a plastic spatula/knife.
Pull the cake and tube out and set it on your tray.  Gently scrape the bottom of the cake to loosen it from the bottom and also loosen the cake from the tube itself.  You can then either lift the cake up and pull out the pan,  or invert the cake onto a second plate, pull out the tube, and tip it back on the tray so the rounded side is face-up.

This cake is truly worthy of a nice footed cake server.  It makes about 24 slices, plus some pretty spectacular crumbs.

All it took was $500 and a good idea back in 1946, when Dave and his wife Dotty, started a business venture in the basement of their home, and from that point on, the company 's first bakeware products took-off. The Rosette Iron, Ebelskiver Pan, Krumkake Iron and Platte Panna Pan, became the first products, as well as the ethnic specialties in which the foundation was laid for the newborn company.
In 1948, the Dave and Dotty purchased Northland Aluminum Products, combining their own line of aluminum products with Northland's, and began producing bakeware and household items under the Nordic Ware trademark. Dave was an entrepreneur at best, and often was heard to say, "If you can sell it, you can usually make it."

In 1950, the landmark pan was introduced, after the Minneapolis Chapter of the Hadassah Society asked Dave and Dotty to produce a kuglehof pan, similar to the one the society's president had received from her grandmother in Germany. Dave produced the pan from cast aluminum for the Hadassah Society and a few for the Nordic Ware trademark, which he sold to department stores using the name, bund pan. (The word bund means a gathering-thus a bund cake, with its characteristic fluting, was a cake suitable for a gathering or party.) Nordic Ware created the pan and filed for a trademark to protect its creation, renaming the pan the Bundt pan.
Ella Helfrich, in 1966, used a Bundt pan for her winning recipe of Tunnel of Fudge Cake, in the 17th Pillsbury Bake-off. Following the contest, Pillsbury was overwhelmed with more than 200,000 requests from people that wanted to purchase a winning Bundt pan. In 1971, Pillsbury launched a line of Bundt cake mixes, licensing the name from Nordic Ware that continued the nationwide quest for Bundt pans. Now, Nordic Ware markets its own line of Gourmet Bundt® Cake Mixes.
"Today, there are nearly 60 million Bundt pans in kitchen's across America," Nordic Ware President David (Dave &amp; Dotty's son). said. "Almost a Bundt pan in every pantry." The Bundt pan has continued its growth in popularity. It has been a guest on TV cooking shows, featured in an array of magazines and also used by some of the world's famous bakers. It is likely the most popular baking mold in the world.
Posted by Betsy Teutsch at 10:39 AM

Email ThisBlogThis!Share to TwitterShare to FacebookShare to Pinterest
Labels: recipes