Rabbi Robert Tabak on Jonah: Endings to the Story 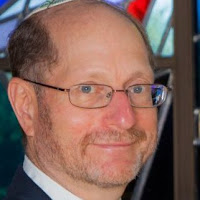 Jonah: Endings to the Story

This dvar Torah is dedicated to the memory of my father, Sol Tabak z”l who for many years read the Jonah story in English at his congregation, Adat Shalom, in San Diego.

Rabbi Gail Diamond, quoting Uriel Simon asks, if teshuvah (repentance) is at the center of the book of Jonah, where is it in first 2 chapters – the prophet fleeing , the boat, great fish, etc.?  The sailors are presented as good, moral people. Jonah is fleeing God and also declares his awe of God.  But no one is called on to repent.
However, teshuvah is at the center of the story, and at the center of Jonah’s anger in the last two chapters.
The Rabbis teach that teshuvah is one of seven things created prior to creation – (BT  Nedarim 39b/Pesachim 54b)
שבעה דברים נבראו קודם שנברא העולם, ואלו הן תורה
תשובה וגן עדן וגיהנם וכסא
הכבוד ובית המקדש ושמו של משיח.
- *תשובה -
"**בְּטֶרֶם הָרִים יֻלָּדוּ...  וַתֹּאמֶר 'שׁוּבוּ בְנֵי אָדָם!'*".
Seven things were created before the world, viz., The Torah, repentance, the Garden of Eden, Gehenna, the Throne of Glory, the Temple, and the name of the Messiah….Repentance, for it is written, Before the mountains came into being [yuladu-were born], before you formed the earth and the world . . . You return humans to dust, you decreed “Return [shuvu] you mortals.” (Ps 90:2-3, “Tefila l’moshe ish ha-elohim”)


In this list of seven things – one of them is not like the others – only teshuvah is a quality, or potential quality, of human life, for all people.

At the end of chapter 4, why is Jonah angry? He says, I knew you were El rahum (A merciful God) , using the same language as Exodus 33-34 after the Golden Calf.
Again: Why did Jonah leave the city? (4:1-4) the text says, because he sees that God is forgiving . Jonah wants a God of absolute justice, of din (at least for gentiles).” Please take my life from me” (twice!)– God  asks (as Rabbi David Steinberg notes, seemingly with sarcasm) “Are you that deeply grieved”? and again after the plant dies.
Ruth Loew asked me a great question:  What happened to Jonah next?  The biblical story ends with the people of Nineveh changing and God telling Jonah about God’s compassion . We don’t hear anything of Jonah’s life after his mission to Nineveh.  Is there a capacity for Jonah to change as well?
Our interactions with others change us – something that I learned in many years working as a chaplain.
The rabbis taught in Leviticus Rabbah (34:8) It was taught in the name of Rabbi Yehoshua:  The poor person does more for the householder (who gives tzedakah) than the householder does for the poor person. (trans from Danny Siegel, Where Heaven and Earth Touch vol 1, no.53) Sometimes we think we are “helping” others, and we will be helped, or changed, more by that interaction than the other person will be.
Once when I was a chaplain, I met a minister and a rabbi who were both hospital patients on a transplant floor.  Both were from South Jersey, but they had hardly known each other – meeting only once or twice at clergy meetings.  The minister heard that the rabbi was getting sicker and sicker and needed a kidney donor.  She said to herself, maybe I can do this.  She was tested, they matched, and both were in the hospital for the transplant. (They also told their story to the newspapers, so it is not confidential).  I don’t know if my visits as a chaplain to each of them helped them or not.  But these visits affected me and made me see how deeply hesed (lovingkindness) can affect people who hardly knew one another.  We may all not be able to be organ donors, but we can show kindness even to those we do not know.
The story of Jonah as written ends with God admonishing Jonah, with teshuvah possible, even for the evil deeds (hamas –  violence or theft) of the city of Nineveh.  At the end of the book we just read this afternoon, the sukkah is gone. The plant is dead.  The king and people have changed.
And presumably Jonah makes the long journey back from Nineveh to the land of Israel.  What is in an imaginary Chapter 5?
I don’t want to give a single answer, but will share a few possibilities for Jonah, Chapter 5
1)      Jonah returns home, and is still resentful of the hesed (lovingkindness) of God, which overruled strict justice.  He goes around grumbling, and saying “Nineveh, its king and citizens were probably faking.  They didn’t mean it—they just wanted to save their necks.  The first chance they get they will cheat and will probably attack Israel, too.”
Jonah was a messenger who still did not believe in the message he had carried.

2)      Version 2.  Jonah returns home, deeply affected by his encounter with human transformation.  He is overwhelmed, even smitten, by hesed/lovingkindness.  The people of Nineveh, he realizes, did not repent because of his great oratory or skills (he spoke in a foreign accent) but because somehow the content reached their hearts.     On the long, hot road home, Jonah thinks about the dead plant he had been willing to die about, and realizes that all of God’s creatures – human and beast, Israel and gentiles, and even plants that die in a day are somehow connected to a wider reality.  Even the thief who steals his donkey and backpack one night is one of God’s beloved creatures.
3)      Version 3.  Jonah returns home.  He realizes that people can change, and that God can forgive. He also knows that not all the people of Israel, not all the people of Nineveh, not all the beasts are kind and loving.  He knows some are capable of great evil. But people are also capable of good, and more significantly, capable of transformation.  Jonah realizes that he is not the center of the story.  At most, he is a messenger.  Jonah has to confront his own anger that God is el rachum v’hanun  (a God merciful and forgiving), that God who somehow forgave the Golden Calf and the Ninevites might forgive him, and might forgive Israel, if they truly change.

I  want to conclude by sharing a midrash that connects three essential qualities (tzedakah, teshuvah, tefillah ) of the Days of Awe to one verse that we don’t often read, from Second Chronicles when King Solomon dedicates the First Temple in Jerusalem :  (Pesikta d’rav Kahana, BaYom HaShemini Atzeret 28:3).

Rabbi Yudan said in the name of Rabbi Elazar:
Three things-
prayer, Tzedakah, and turning-to-Menschlichkeit [Teshuvah]
eliminate [unfavorable heavenly] decrees. (shelosha hen she-matbilin et ha-gezerah).
and all three can be derived from a single verse:
“When My people, who bear My name,
humble themselves, pray,
seek out My face,
and turn from their evil ways,
I will hear in My heavens,
and will forgive their sins,
and heal their land.” (II Chronicles 7:14)
“pray” (va’yitpallelu)- this refers to prayer
“seek out My face”—this refers to Tzedakah
as it is written elsewhere “I through Tzedakah (tzedek) shall see your face.” (Psalm 17:15)
and “turn from their evil ways”—this is turning-to-Menschlichkeit [Teshuvah]
And what is the conclusion of the verse?
“I will hear in My heavens
and forgive their sins…”
[R.Tabak adds the final words of the verse, not quoted in the midrash: “And I will heal their land.” (v’arapeh et artzam)]
trans:  Danny Siegel, Where Heaven and Earth Touch vol. 3, no.38)
I can’t tell you the ending of the Jonah story.  We have to try to write our own endings, with our life stories, as best we can, with help from one another.