Dorshei Derekh has donated generously to Shining Hope for Communities the past two years, from our Purim tsedakah project.  Nicholas Kristof devoted his column today to telling the story, and while it's directed at people who donated to the Kibera School for Girls through his Mothers Day column,  Dorshei Derekh can feel addressed, as well!

In a Mother’s Day column in the spring, I suggested that readerscommemorate the day not only with flowers but also with a donation to lift up women around the world. Readers showered one group that I mentioned, www.MothersDayMovement.org, with more than $135,000 that was forwarded to a slum empowerment group in Kenya.
Enlarge This Image 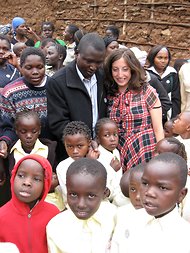 Kennedy Odede and Jessica Posner in the Kibera slum of Nairobi, with some of the beneficiaries of their programs.

A student at the Kibera School for Girls cools off after lunch. The school is expanding, thanks in part to donations from Times readers.

Nicholas D. Kristof
So while in Kenya recently, I dropped by to see what was being done with your money. In the grim alleys of the Kibera slum in the capital of Nairobi, I found a dazzling girls’ school being built with some of those donations — and, yes, I found a love story.
The saga begins with a young man named Kennedy Odede who grew up in the slum. He never received a formal education and lived homeless on the streets after the age of 10, but he was exceptionally bright and taught himself to read.
When he was about 15, a visiting American gave him a book about Nelson Mandela — a biography that captivated Kennedy. Another American visitor, charmed by hearing of the impact of the first book, gave him a biography of the Rev. Dr. Martin Luther King Jr. “That book changed my life,” Kennedy recalls.
Dazzled by Mandela and King, Kennedy resolved to fight for social justice. Already active in Kibera, he bought a soccer ball and announced the formation of a youth soccer club that would wrestle with social issues.
Kennedy had become outraged at the abuse of women, partly because his 16-year-old sister had been raped and become pregnant. So his soccer club began to hold street theater performances to denounce sexual violence.
Jessica Posner, a Wesleyan University student interested in theater, heard about the performances and decided to spend a junior year abroad helping the group. She arrived in Nairobi — and then insisted on living inside the Kibera slum itself.
“I thought she was crazy,” Kennedy remembers. He told her that there was no indoor toilet or running water, and plenty of rats. She is white, and Kennedy told her that no white people lived anywhere nearby. But Jessica got her way, sharing a room with four other people — and a romance blossomed.
Kennedy told Jessica of his dream to get an education, and Jessica nudged the Wesleyan admissions office into offering him a full scholarship — even though he had never gone to formal school before.
So Kennedy flew to Connecticut to begin college as a freshman at the age of 23, and, after her graduation, Jessica flew out to Nairobi to help expand his program, called Shining Hope for Communities (ShiningHopeforCommunities.org). They won grants fromNewman’s Own Foundation, Echoing Green and DoSomething.org, and they used the money and Jessica’s savings to start the Kibera School for Girls.
Jessica, now 25, showed me around — chattering with local people in the Swahili and Luo languages. It’s staggering what she and Kennedy have created. The Kibera School for Girls now has 64 students in pre-kindergarten through second grade, adding one grade a year. Almost 500 children competed for the 19 slots in the current pre-kindergarten.
The school looks like a good American school, and classes are taught in English. Even though English is a second or third language for these children, 82 percent perform at American grade level — and these kids are ravenous to learn.
“Some of the first and second graders are reading at seventh-grade level,” Jessica said proudly.
Still, obstacles are enormous. This broke my heart: At least 20 percent of the girls have been raped, the teachers say. Rapes have left two of the kindergarten girls with fistulas, internal injuries causing them to leak wastes.
The school has helped prosecute an alleged rapist of a 4-year-old kindergartner who required surgical repairs and is working to end the impunity on sexual violence in the community. It also provides a dormitory for half-a-dozen girls who are at risk of sexual violence in their own homes.
With the money from Times readers, Shining Hope is now building a much larger school that is expected to accommodate 500 pupils. It has also bolstered services, including free family planning, for women at a clinic it runs. It trains women entrepreneurs and has just installed a new water tower that is expected to become the slum’s largest source of clean water. It operates a public library and computer center where slum-dwellers can earn money by performing Internet piece work.
Shining Hope also oversees a network of public toilets, one of which produces biogas used to cook meals for children at the school.
All this may be just a beginning. Kennedy says his dream is to expand Shining Hope across East Africa.
So that’s what your money has wrought. You should be proud. And one more thing to make the story perfect: In June, after Kennedy graduates, he and Jessica plan to marry.
Posted by Betsy Teutsch at 6:41 PM

Email ThisBlogThis!Share to TwitterShare to FacebookShare to Pinterest
Labels: Tsedakah